In 1950, at the instigation of the 3rd Viscount Brentford, the Worshipful Company of Girdlers decided to provide a scholarship for an outstanding New Zealander to come to England to study for a degree. The Worshipful Company of Girdlers has had an association with New Zealand since 1933 and in 1952 resolved to set part of its income aside for the purpose of a scholarship to enable distinguished New Zealand school students to undertake a degree course at either Oxford or Cambridge. For its undergraduate degree it is now specifically Corpus Christi College, Cambridge.

During their residence at Cambridge, the Scholars’ personal wellbeing and academic progress will be monitored by members of the Girdlers' Company through visits each term to Corpus Christi, by discussions with the Senior Tutor and other members of the Faculty and through meetings at Girdlers’ Hall in London at such times as the Scholars are invited to attend various functions hosted there including the Waitangi Day service.

The purpose of the scholarship is to provide New Zealand students who have distinguished themselves in their school in New Zealand with the benefit of residence within Cambridge University, not only to take an honours degree but to broaden their outlook by taking advantage of their experience as undergraduates at Corpus Christi College and Cambridge University. As well as achieving academic qualifications, special consideration will be given to the all-round qualities of the candidates and the contribution that he or she might make in the future to developments in New Zealand. It is a pleasure to welcome our four honorary members, five including the post grad Honorary Member from Oxford University, and learn a bit more about what they do and how they settled in. Let's find out more about them and hopefully you will be able to meet them at one of our events. 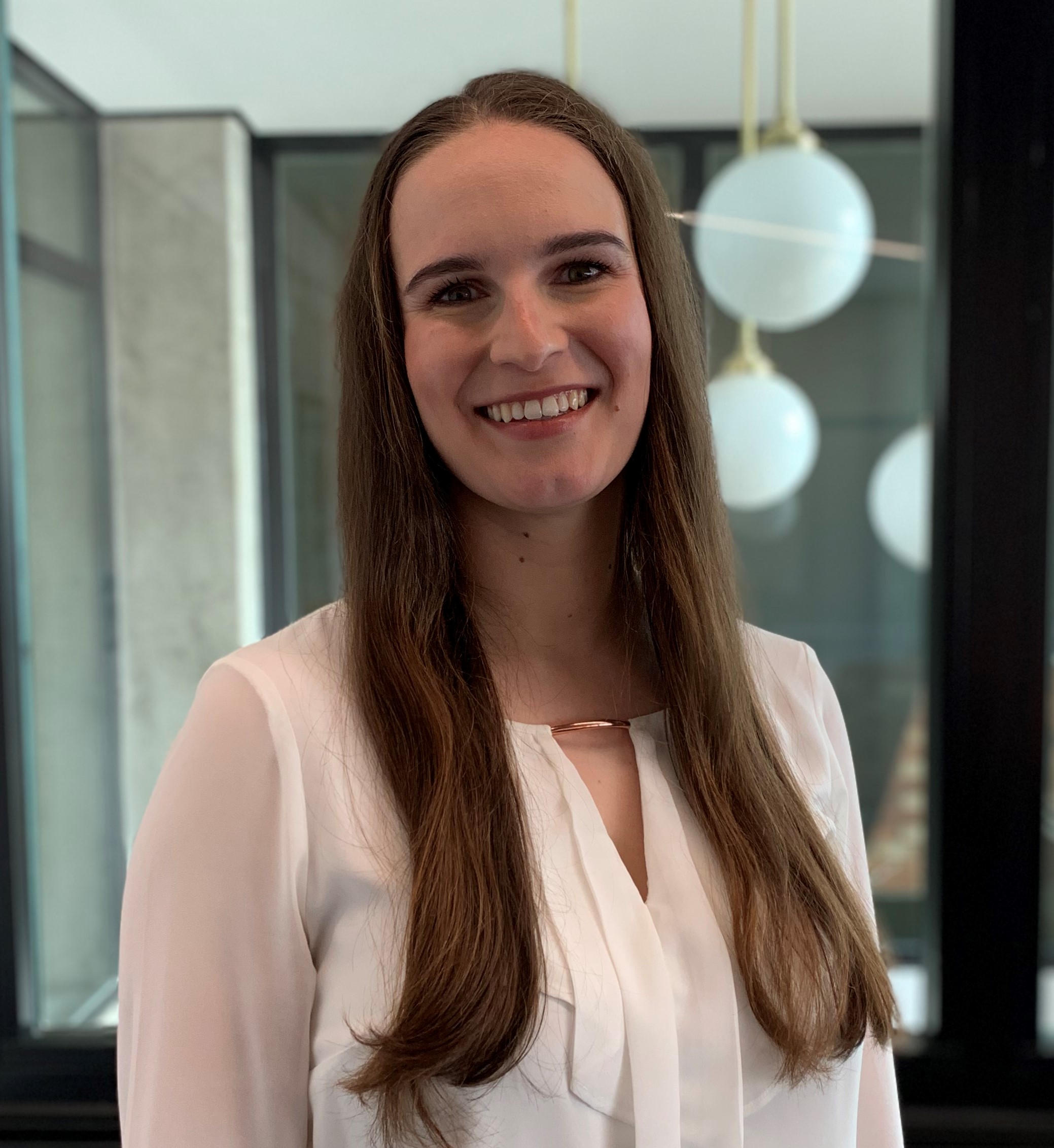 Hi I am Cervantée Wild. I grew up in New Plymouth, Taranaki. 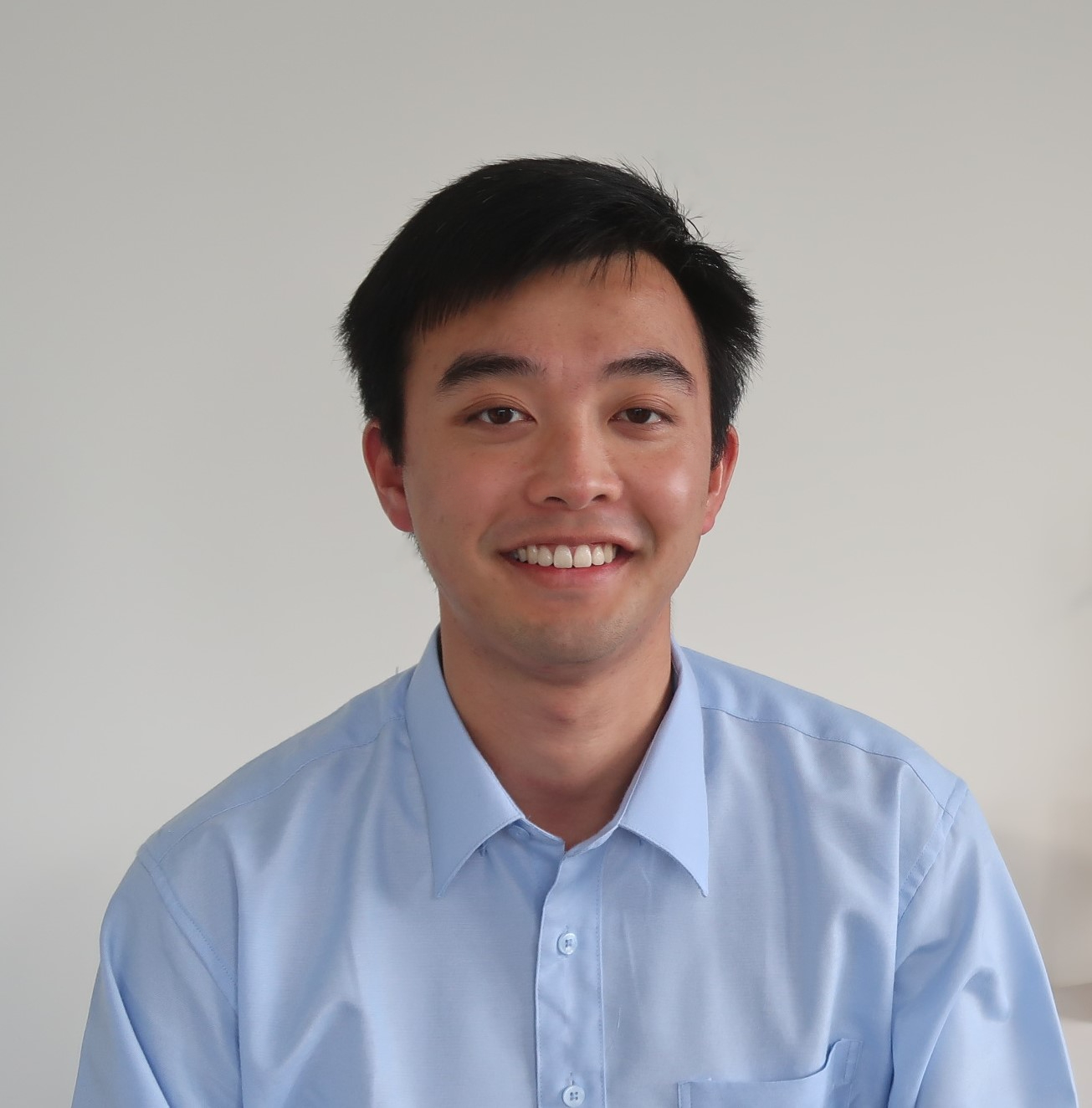 Kia ora koutou! I’m Andrew and I'm a born and bred Wellingtonian although I’m currently in my third and final year of reading Economics at Cambridge.

I’ve loved my time immersed in the traditions of Cambridge and the history of the UK and am sad that it has flown by so quickly. That said, the short and hectic 8-week terms at Cambridge can take some getting used to – the entire year’s teaching is crammed into 16 weeks! My favourite spot would have to be The Orchard Tea Garden in Grantchester – it’s a great half-day walk to escape the Cambridge bubble with the promise of a well-deserved high tea waiting at the end.

2022 is set to be an exciting year with graduation scarily on the horizon. I’m looking forward to moving to the City and starting work at McKinsey & Company but I'll certainly miss being so close to the mountains and ocean in New Zealand. 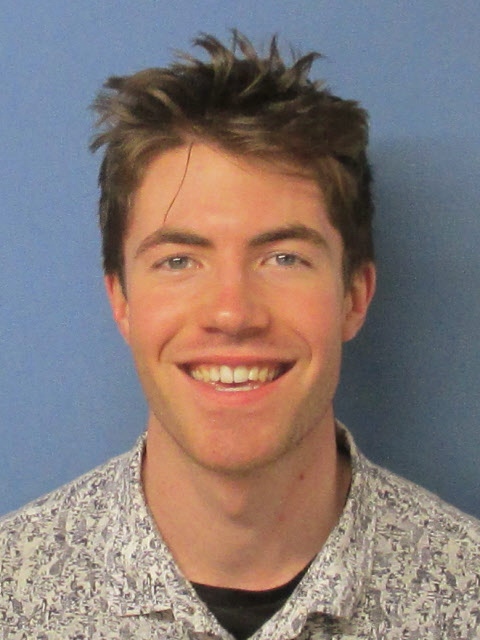 ​Matthew Sutcliffe (3rd year) Kia ora, I grew up in the bays of Eastbourne, Wellington. Over here in Cambridge I am a finalist reading Human, Social and Political Sciences, specializing in Politics and International Relations. I am currently researching Sino-American relations in the 21st century and the role of religion in global politics.

My academic interests lie principally in security studies and political economy; over the recent winter I had the privilege to work in the National Security Group of the government's DPMC in this connection.

Outside of academics, I've found little time to keep up Athletics training between the demands of the degree and the injuries incurred from all the road running, but nonetheless do enjoy getting down to the track when I can. I am our club's Vice-president this year.

Most of all I think I miss the untamed New Zealand shelf seas and the rugged hills of Wellington.

I look forward to meeting you all at future society events! 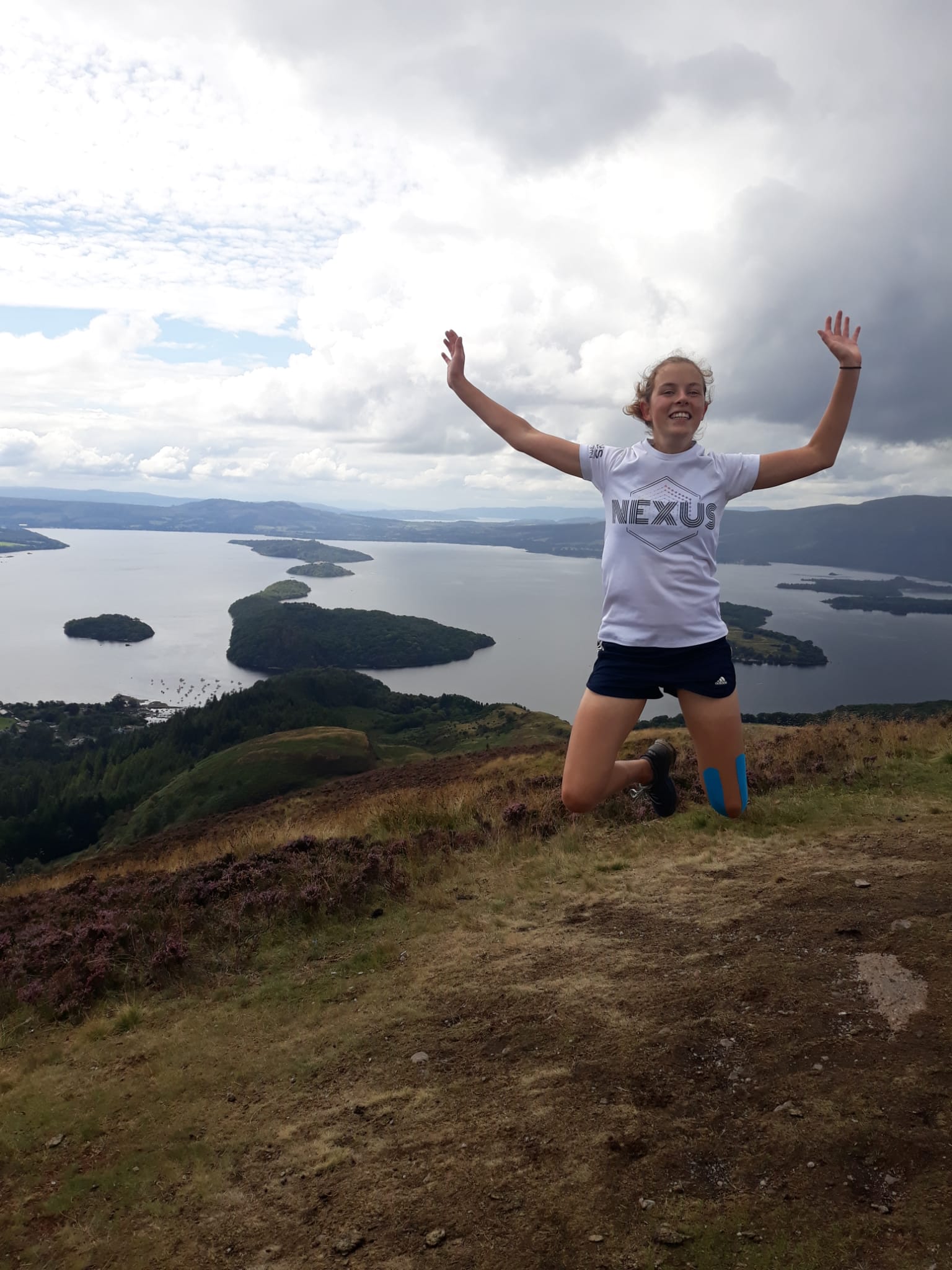 Tēnā Koutou, my name is Sophie Mance and I'm currently in my second year at Corpus Christi College, Cambridge, reading Physical Natural Sciences. I grew up mostly in Wellington as well as a few years in Belgium and The Netherlands. The opportunity to study at Cambridge continues to be amazing despite the challenges of Covid. Border restrictions saw me spend my summer exploring the UK by foot, bike, and train before starting my second year at Cambridge. Natural Sciences is a fascinating course as it's allowed me to continue to study a broad range of subjects, and in-person lectures and lab work have been a welcome change from my first year. As well as academics I keep myself busy with sport.

I am captain of the university mixed Ultimate Frisbee team and Women's Vice Captain Corpus Christi College Boat Club having picked up rowing in Lent last year - nowhere beats a clear morning on the river! I feel very fortunate to have snagged an MIQ spot over Christmas so have spent the holidays catching up with friends and family, the thing I miss most from New Zealand is definitely my twin sister. In 2022, all going to plan, I'm looking forward to more sport with Varsity Ultimate Frisbee, various national championships, and Lent Bumps all planned. 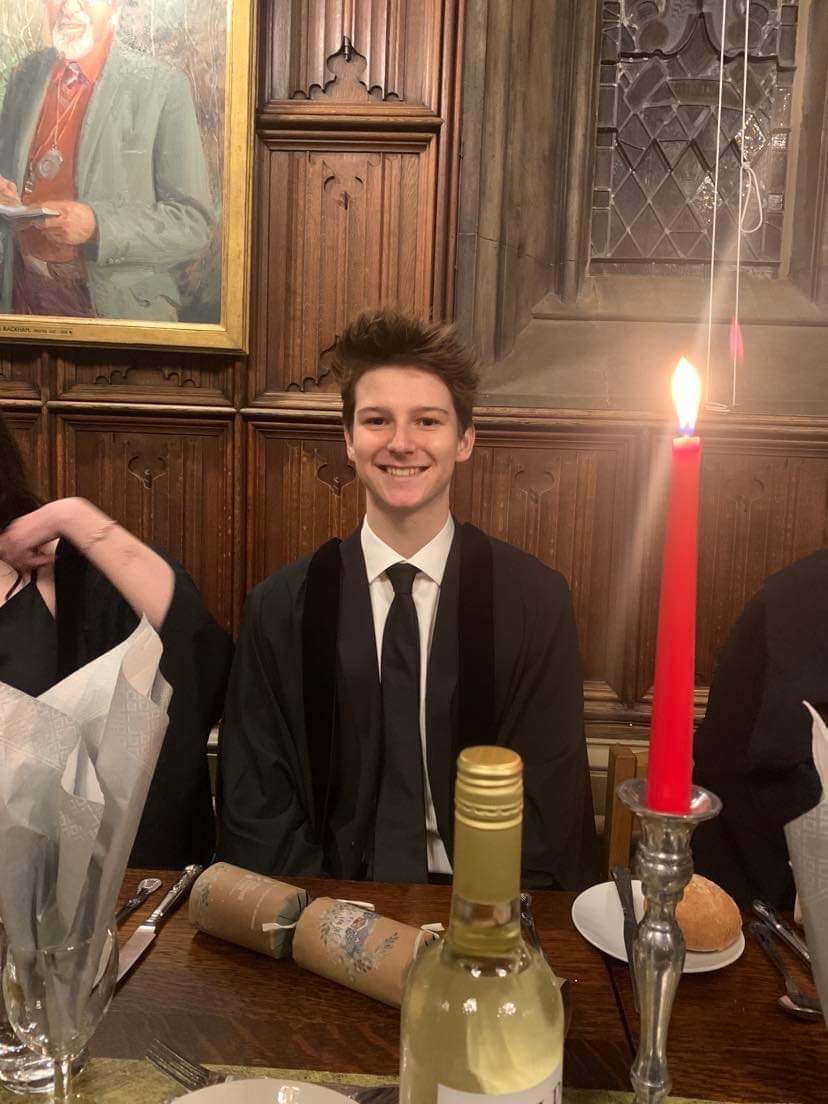 Hi I am Benjamin Adams from Tauranga! 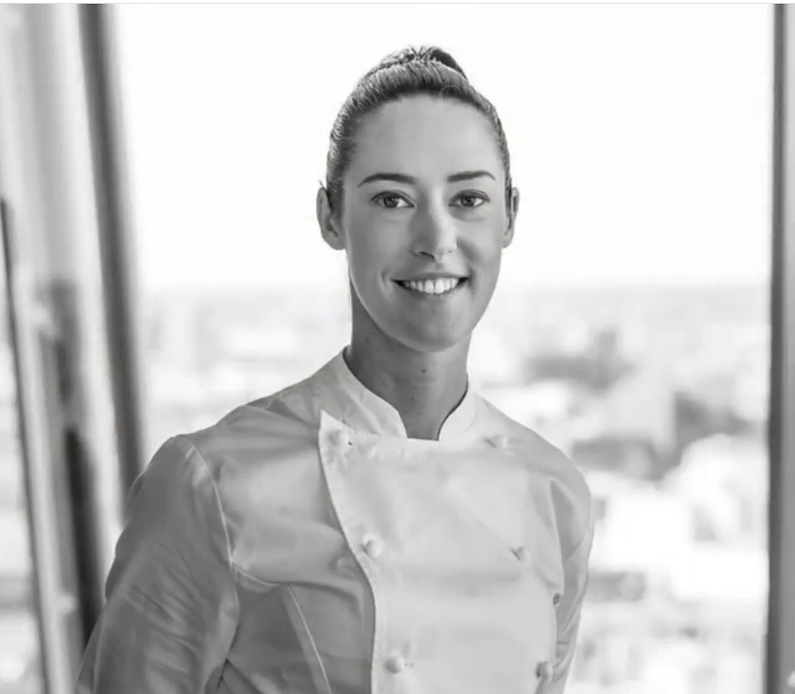 Heather Kaniuk might not yet be a household name like Gordon Ramsey or Heston Blumenthal however Heather is part of the crème de la crème in the culinary world. Heather has previously undertaken the role of Executive Pastry Chef in two of the most prestigious 5-star hotels in London - Shangri-La At the Shard and the Mandarin Oriental, Hyde Park.

Prior to this she oversaw production for the Hakkasan Groups' Michelin-starred dimsum tea-house, Yauatcha, and its retail patisserie outlets. She worked as a Head Chef aboard super yachts, and spent time refining her bakery skills in America and Canada. Here she undertook several internships and stages including at The French Laundry (3* Michelin), The French Pastry School of Chicago, and The San Francisco Baking Institute. Returning to London, she obtained a first class honours degree in Hospitality Management from the University of West London. Heather has won awards locally and globally, including winning Best Contemporary Afternoon Tea in the London Afternoon Tea Awards (2016). She has been featured in Cap'Recette Style (2018), La Journal du Patissier (2017), The Staff Canteen and numerous online sites. Let's get to know more about Heather.

Tell us a little bit about yourself. I'm a Kiwi- hailing originally from West Auckland. I was lucky enough to win the NZ-UK Link Foundation scholarship at 19 years of age- which brought me to the UK. I've been in the UK on and off ever since, though I do hope to move back at some point! London has afforded me opportunities which I am forever grateful for, especially as a young chef when I was starting out.

What made you want to become a pastry chef? I originally trained as a chef- and loved the adrenalin rush and speed of service within the hot kitchen. However, after a number of years in this environment- kitchens which traditionally were very masculine; I found a love for bakery and patisserie. I had always loved baking, but I made a conscious move to the pastry side half way though my career, and never looked back. Pastry and desserts in general are the last thing a customer eats, and often the thing that puts a smile on peoples' faces.

You have worked in some amazing restaurants including Peter Gordon's Providores (he was the first UK New Zealander of the Year, 20 years ago!). How do you choose where you work or are people approaching you? I've always believed that every step in my career has been a chance to learn a specific skill or proficiency that I wanted to learn- either from a company or person I respected. Throughout my career, I have built up a wide range of knowledge across all areas of the kitchen- be in the hot section, pastry, bakery and management. Whilst Michelin restaurants teaches refined cooking skills and techniques, hotels taught me organisation and management skills, and the likes of Peter Gordon taught me the importance of looking after your team like they are family.

You have previously undertaken the role of Executive Pastry Chef in two of the most prestigious 5-star hotels in London- Shangri-La At the Shard and the Mandarin Oriental, Hyde Park. What was that journey like for you? And what was the most important lesson you learned? Both of these roles were extremely rewarding- both hotels are the epitome of luxury, and both are within gorgeous buildings- each was a pleasure to work in. While each presented its own challenges, I really loved the challenge of the many moving parts that make a hotel run smoothly. Ensuring strong inter-departmental relations allows for exceptional customer service- and being able to deliver those unexpected 'wow' moments for our guests. 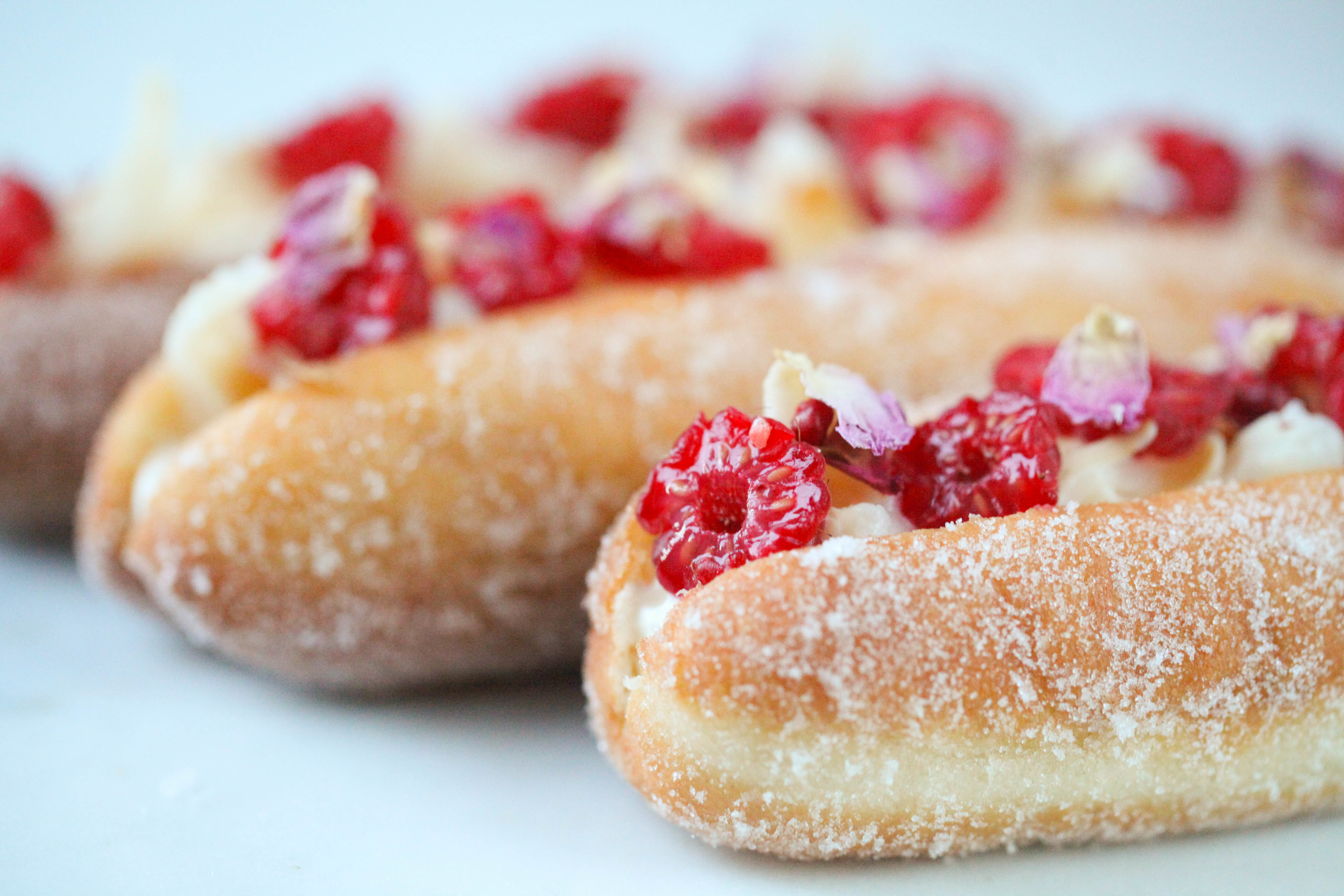 Your partner Graham Hornigold is also a pastry chef, do you two complement each other professionally? We like to joke that Graham is more "old school" and I am more "new school"- we have different strengths and weaknesses but come together to bounce ideas off each other. We learn from each other and utilise our different skillsets and I think this has helped us immensely in running our businesses. There are definitely times where we are perhaps a bit to competitive- but it always ends well!

You and Graham started 'Longboys'. How did you transcend from Michelin restaurants in starting your own business? We first founded Smart Patisserie- a full service pastry and hospitality consultancy service, in 2017. Through this we help other restaurants, hotels and food businesses with training, menu development, business acumen, kitchen design and initial set up. We often travel and work around the globe-but also wanted to contribute something the to UK culinary scene. Longboys was an idea conceptualised around the desire to create a pastry that was accessible to all, but with the knowledge and quality of ingredients and flavours derived from our time in high-end patisserie.

As a top end pastry chef how do you balance work and private life? This is something I'm still working on! The transition to starting our own businesses I hope will in future yield the flexibility to allow more work-life balance- however at this stage with both businesses being less than 2 years old, it's not exactly possible.

Who currently inspires you? All the Kiwis doing awesome things with food in London. Peter Gordon, Miles Kirby and team at Caravan, Mel Brown, Chantelle Nicholson and many, many others (way too many to name!). There's such a great network of New Zealand foodies.

Do you have a favourite pastry? I have a particular love for a quality croissant, and the traditional French Canelés de Bordeaux. Sometimes the simple things are the best.

Finally, Heather, what is your favourite place in London to relax? I love the multitude of open spaces, woodlands and parks in London. I used to live in North London and love Hampstead Heath- though these days I'm closer to Greenwich Park and Blackheath. Wherever I can go for a walk in fresh air, with Graham and our two dogs, is a good day out.

Heather and her partner will be having a stand at our Christmas Fayre as a new Loyal Kiwi Card member promoting Longboys. Heather now focusses primarily on her business, Smart Patisserie, alongside her partner Graham Hornigold. www.smartpatisserie.com

By signing up you agree to receive news and offers from New Zealand Society (UK). You can unsubscribe at any time. For more details see the privacy policy.